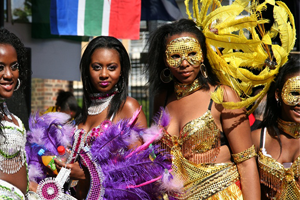 The Notting Hill Carnival, the largest street festival in Europe, is taking place on 27th to 29th August this year. The streets of West London will be packed with colourful decorations, delectable food and calypso music. There will also be intricate floats and vibrantly costumed performers on the streets to the sound of steel bands. This annual event celebrates the Afro-Caribbean cultures and traditions.

The Notting Hill Carnival has a very rich and interesting history. It dates back in the 1950s and 1960s, which comes from two separate but connected elements. First is a Caribbean Carnival on 1959 during a problematic time where racial attacks were rampant. Claudia Jones from Trinidad organised an indoor cabaret style carnival. Among others, it featured a beauty contest, a steel band and dance troupes. Because of this event, she became the mother of the Notting Hill Carnival.

The other element held in 1966 was the London Free School-inspired festival. This was the first outside-organised event in Notting Hill. This event was more diverse, promoting unity among different cultures. This was the time the street party for neighbourhood children became a carnival procession. The same steel band of Russell Henderson in the 1959 event graced this carnival, along with 500 dancing spectators.

In 1973, a young teacher named Leslie Palmer got sponsorships and recruited more steel bands and reggae groups. He also extended the carnival route, got better sound systems, encouraged traditional masquerade, and introduced generators. For the first time, costume bands and steel bands from other islands joined the carnival. The Notting Hill Carnival only became a major festival in 1975.

The Notting Hill Carnival happens on the weekend of the August Bank Holiday. The Association of The British Calpypsonians has set up the London Calypso Tent for the duration of the carnival. It features whimsical performances by UK Calypsonian and international artists. They will entertain spectators with their poetry, storytelling, political commentary, comedy, and others. It will be open from 8 pm to 11 pm.

On the 27th, the Panorama, a free open-air event will feature a lovely night for families who enjoy music. Happening at the Emslie Horniman Pleasance Park from 6 pm to 10 pm, it will hold a competitive performance by national steel bands.

The Jouvert marks the official opening of the carnival on the 28th. From 6 am to 9 am, the procession starts and finishes at Canal way, Ladbroke Grove. On this day, a joyous children parade will be taking place. It showcases extravagant costumes and wonderful rhythms provided by mobile sound systems or steel bands. Since it is also meant to be a family day, numerous family-oriented activities are in store for spectators. The “World Music Stage” at Powis Square is a display of vocals both by seasoned and emerging artists. There will also be Family workshops at Emslie Horniman’s Pleasance, featuring a variety of appetizing Caribbean foods and drinks. Amidst all these, 38 systems are cleverly located around the footmark of the carnival.

The Grand Finale on the 29th features a total of 60 impressive bands in vibrant costumes. There will be a continuation of “World Music Stage” at Powis Square.
UK Calypsonians, soca artist, as well as visiting international artists are also performing. The last day of festivities will start at 10 am and end at 8:30 pm.

We immensely take pride for being the original and premier academic essay writing provider. We are constantly looking for new ways …
END_OF_DOCUMENT_TOKEN_TO_BE_REPLACED