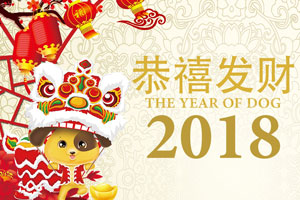 It is time to greet our Chinese friends a Xin Nian Kuai Le today, 16th February.
China and countries with significant Chinese population will be having yet again 15 days of celebrations for Chinese New Year 2018, their most important holiday, as they welcome the Year of the Dog.

Unlike New Year’s Eve celebrated every first of January each year by most people around the world, Chinese New Year follows the lunar calendar. It starts on the new moon, which occurs between 21st January and 20th February. The first day of Chinese New Year in 2017 was on 28th January.

According to Asian astrology, the year of the birth and the animal it represents influence some of the personality traits of a person. The Dog is considered man’s best friend, which is why those who were born in the Year of the Dog are often described as loyal, honest, reliable, expressive, and sincere.

Here is the fortune of people born in the Year of the Dog according to the Chinese Horoscope:

Whether you believe in horoscopes or not, it is still up to you to strive to have a good year. Hurdles will always be around and you have the power to beat the odds. As the common Cantonese greeting Gong Hei Fat Choy means, Essay Writer wishes all our Chinese friends a prosperous year ahead!

Tips on How to Start the New Year Right

After all the merriment during the Christmas holiday, have you a thought of a New Year’s resolution yet? Most people.

We immensely take pride for being the original and premier academic essay writing provider. We are constantly looking for new ways …
END_OF_DOCUMENT_TOKEN_TO_BE_REPLACED