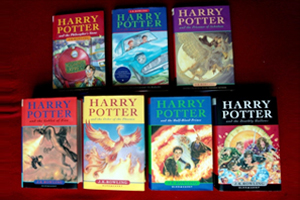 As a tribute, Facebook has given Harry Potter fans something delightful and magical. When you type “Harry Potter” and the four houses “Gryffindor,” “Ravenclaw,” “Hufflepuff,” or “Slytherin” they light up in different colours. Tapping these words on your friends’ posts will interestingly cause a magic wand to appear and produce sparks. Cool, right?

Believe it or not, before Harry Potter took the world by storm, JK Rowling was rejected by eight publishers. It was first thought as a children’s book but it is mainly for the young-adult audience. The books have been translated in 72 languages and sold over 450 million copies worldwide. It has been adopted for the big screen produced by Warners Bros, with each film having blockbuster success.

Die-hard Harry Potter followers who scored the original book first published in 1997 are in it for a treat. Since the publisher Bloomsbury didn’t know what the magnitude of the book will be, only 500 copies were printed. Only 200 copies were sold at bookstores as 300 copies went to British libraries.

According to rare bookseller Peter Harrington, the estimated value of first-edition hardbacks may be up to £50,000. The originally printed hardback versions are extremely rare because only a few were printed.

As reported by The Telegraph, these are the ways to tell if your copy is valuable:

Indeed, the Harry Potter series, franchise for that matter, remains relevant after 20 long years. How about you? Are you a fan of this fantasy literature?

We immensely take pride for being the original and premier academic essay writing provider. We are constantly looking for new ways …
END_OF_DOCUMENT_TOKEN_TO_BE_REPLACED