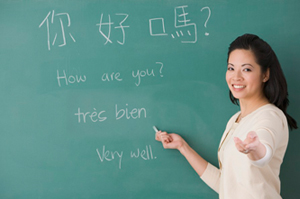 This September, a state-funded bilingual primary school is set to open in Brighton. It will teach the national curriculum using both Spanish and English. Whilst it is not the first English bilingual school, schools of this type are still considered rare in England.

According to the National Centre for Languages, more than 850,000 children spoke a language other than English at home. The centre recently showed a report that bilingual pupils in the UK achieve better exam results than their monolingual counterparts.

Last June, it was reported that in an overhaul of the national curriculum, it will become compulsory for pupils from the age of seven to learn a foreign language. The proposal came amid concerns over the observed decline in students choosing foreign languages at GCSE. In 2004, the government stopped compulsory language study for children after the age of 14.

In Wandsworth, Wix Primary School is an example of a successfully run bilingual school. The school seeks to offer a bi-cultural experience where children learn about life in France and how French children learn from different subjects. It has two head teachers, one from Wix itself and the other from Ecole Charles de Gaulle Wix, a French primary school sharing the site.

Judith Kerr Primary School, a free school which will offer lessons in both English and German, is set to open in London next year. Helping to set it up is a group of parents who feel strongly about the benefits they believe will come from a bilingual education. Peter Johnson, the school’s founder feels there will be interest in a school that offers early language learning. He said: “There is a lot of focus on the core subjects of maths and English in this country but less focus on languages and other subjects.”

We immensely take pride for being the original and premier academic essay writing provider. We are constantly looking for new ways …
END_OF_DOCUMENT_TOKEN_TO_BE_REPLACED