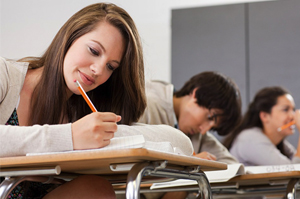 Cambridge University is considering changes to its admissions procedures by reintroducing universal and generalised entrance exams to be taken by all candidates to better gauge the academic abilities of its prospective students. Entrance tests are making a comeback in the admissions process after 27 years.

The AS-level grades of university applicants is one factor that Cambridge considers when offering a place. The proposal to review admissions procedures came in the wake of Education Secretary Michael Gove’s plans to abolish AS-levels. Last week Mr Gove revealed a major overhaul of A-levels to bring back traditional A-levels typically lasting two years accompanied by end-of-course exams. Under the new system, students taking A-levels will no longer undergo testing after one year. Instead they will be sitting exams at the end of the two-year course.

Plans to reintroduce entrance exams in place of AS-levels have met strong reactions from Cambridge faculty, students and other individuals within the education sector.

Cambridge director of admissions Mike Sewell noted that they are already discussing ways to move forward following the A-levels shakeup: “In the light of the Education Secretary’s announcement, the University has of course begun the process of considering all options available to us, so that we may continue meeting our goal of admitting the best and brightest students from all backgrounds.”

“What we are concerned about is that any of the alternatives run the risk of putting good students off, doing the opposite to what AS-levels do, which is encourage people who secure good grades half way through their A-levels to apply.”

For director of Oxbridge applications Jane Welsh, changes to the existing system can be “exciting”. However, she is not in favour of introducing a universal test. She told the HuffPost UK: “Setting one ‘universal’ test for all subjects might present something of a challenge, as the beauty of many of the subject-specific tests such as the Cambridge law test is they really focus on the skills required to excel at that subject at university.”

“While rational thought, and reasoning across numbers, words and space can be tested in a universal test – the introduction of this sort of exam could create a more homogeneous student population, when diversity of thought is one of the most exciting things about Cambridge. Surely, students applying for subjects as different as maths and anthropology might benefit from thinking differently in terms of their approaches to problems?”

We immensely take pride for being the original and premier academic essay writing provider. We are constantly looking for new ways …
END_OF_DOCUMENT_TOKEN_TO_BE_REPLACED