Where to Celebrate St. George’s Day 2017 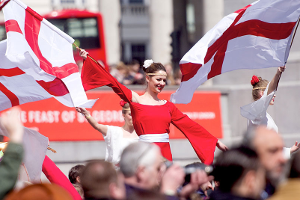 England pays tribute to its patron saint and celebrates St. George’s Day on 23rd April. Why is St. George an important icon for the English even though he had never been to England? He was chosen because he represents traditional English valor and chivalry. According to legend, he slayed a dragon to save a princess while he was a soldier in the Roman army. In addition, English soldiers believed to have seen St. George fight with them. His symbol, a red cross on a white background is the official flag of England. It also forms part of the flag of Great Britain.

How are you celebrating this day? If you decide to stay home or celebrate privately, you can prepare a traditional English roast with family and friends. On the other hand, you can go out for fish n’ chips and old fashioned British pint. It is a good day to incorporate a bit of literature as this day is also National Shakespeare Day in the UK.

If want to party with large crowds, here are the best places you can head to for St. George’s Day:

We immensely take pride for being the original and premier academic essay writing provider. We are constantly looking for new ways …
END_OF_DOCUMENT_TOKEN_TO_BE_REPLACED