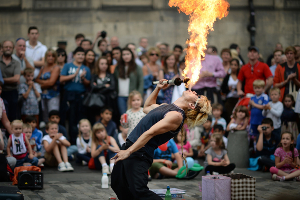 The biggest arts festival in the world is back. Are you ready for Edinburgh Festival Fringe 2017? Drawing massive crowds every year, the Fringe provides a platform to thousands of performers to hold shows for every taste. The month-long event that showcases well-known artists and up-and-comings runs from 4th to 28th August in Scotland’s capital.

This year’s celebrations are extra special as it is on its 70th anniversary. It has been 70 years since eight theatre companies performed uninvited at the inaugural Edinburgh International Festival in 1947. It unknowingly paved the way to a new movement that offered creative freedom to artists through its open access platform.

Living up to its name as the world’s biggest arts festival, the Fringe 2017 assembled 3,398 shows in 300 venues. It features some of the best performers in comedy, physical theatre, musicals, cabaret, opera, dance, circus, and exhibitions.

While there will be a number of entertaining random acts on the streets, make sure to schedule the must-watch performances. Some would be as short as three days, while others will run for the whole month.

The Fringe is known as the stepping stone for a lot of comedians. Some believe that a successful Edinburgh performance can make or break a comic. Audiences flock the festival to get a chance to see them before they become a big name. Here are some of the comedic acts to watch:

Be sure to check out the official Fringe site to learn about the best and unique acts this year. If you require any assistance in writing about this event or other topics, please do not hesitate to get in touch with us. We offer various academic writing services with over a decade of experience under our belt. Please fill out the order form to get started.

We immensely take pride for being the original and premier academic essay writing provider. We are constantly looking for new ways …
END_OF_DOCUMENT_TOKEN_TO_BE_REPLACED