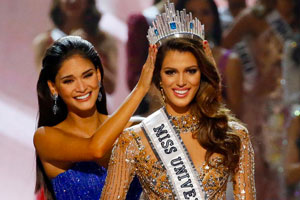 Out of the 86 candidates, 23-year-old Iris Mittenaere from France bagged the 65th Miss Universe title today, 30th January. It has been 63 years since the country has won the pageant. Host Steve Harvey, who mistakenly announced the winner last year, was relieved to have called the correct name this time. Miss Universe 2015 Pia Wurtzbach crowned her successor in her home country, at the Mall of Asia Arena, Manila Philippines.

Some people may be wondering why it is referred as the 2016 pageant when it is already 2017. It is actually the second time in history that it skipped the entire year. The other one was in 2014 when the pageant was held in January 2015.

The candidates had the opportunity to tour around the Philippines, not just in Manila. The beautiful ladies attended ancillary events that did not have effect on their total pageant scores. After the fun activities in their tours, they went through the nerve-wrecking three-day preliminary event. They had interviews, as well as evening gown and swimsuit competitions before the coronation night. These events determined the top 13 finalists for the live broadcast.

Although Miss Philippines was a crowd favorite, Miss Thailand won the fan vote. The voting was done through the Miss Universe official website, Vodi application and Twitter. The pageant has garnered over 213 million fan votes from all over the world. Philippines, Kenya and Thailand made it to the top 6. After answering questions sourced from an online US-based agency, only Colombia, France and Haiti made it to the final 3.

The top 3 were asked to answer one question that concluded their fate. While one contestant gave her answer, the two stood on the side with noise-cancelation headphones. The final question was: Name something from the course of your life that you failed at, and tell us what you learned from that experience.

Colombia’s Andrea Tovar was named 2nd runner up, while Haiti’s Raquel Pelissier the first runner up. Plus-size model Ashley Graham assisted Harvey and was the event’s backstage host. Rapper Flo Rida had a very energised performance to open the night. Grammy winner Boyz II Men serenaded the top 3 beauties as they made their final walk before the coronation.

Miss France is the only second candidate from her nation to be crowned Miss Universe. She is also the first European title holder since 1990. Pursuing a degree in dental surgery, she aims to advocate for dental and oral hygiene. In her final question, she cited an example about not being able to find her name on a list. She finished her answer saying, If tonight, I’m not one of the winners, I would still have had the great honour of being one of the three finalists. So, I think that I have failed before, but for me this is a great first opportunity.

Indeed, this experience would not be considered a failure or merely a great first opportunity but a victory for her. Essay Writer would like to congratulate Miss France, Iris Mittenaere for being crowned Miss Universe 2016.

We immensely take pride for being the original and premier academic essay writing provider. We are constantly looking for new ways …
END_OF_DOCUMENT_TOKEN_TO_BE_REPLACED