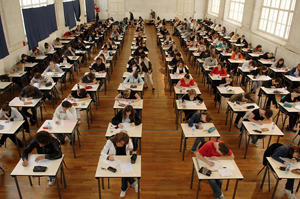 The increase in the number of enrollment in IGCSEs can be attributed to teenagers’ describing it as easy. More schools are also offering it than ever before because as students get higher grades, schools also get better ranking in official league tables.

IGCSEs are primarily developed for schools overseas. And because the students for which it is intended for are expected to be mostly not having English as a first language, English in the IGCSEs are not that hard. True enough, enrollees to IGCSEs in English have quadrupled with a previous count of 18,000 to the current figure of 78,000. Its ratio in this summer’s exam is a little bit over one in every eight pupils.

The increase in the English IGCSEs, however, cannot be conclusively blamed on the qualification’s reputation as easy. Qualifications watchdog Ofqual says that the reason why students are moving to the international edition is that they think the conventional version is simply unpredictable. In last year’s results, a big number of pupils have missed out getting good grades because there was a sudden shift in grade boundaries. It should also be noted that many pupils are sitting IGCSEs together with their conventional edition.

Teachers and academics believe that the difference in the difficulty level is a factor which should be looked into. Pupils’ view that the international qualification is easier to pass could be the driving force moving them towards it and schools could be more motivated to offer them because it will help them climb the league tables because of pupils’ better results. Association of School and College Leaders general secretary Brian Lightman relates that feedback from schools about IGCSE is that it is easier. Pupils can choose with more flexibility among books they can read, among other aspects. Schools believe that pupils will get better grades in them than in the conventional version of the qualification.

The exodus to IGCSEs started in 2010 when rules imposed under Labour prohibiting state schools in England from offering them as an alternative were scrapped by Coalition. With the ruling, schools have practiced their right to use Government funding for IGCSEs and exam results became part of league tables. In IGCSEs, students have to do well in exams they sit at the end of two years but they do less coursework. Independent schools prefer this. On the other hand, conventional GCSEs have become stricter.

We immensely take pride for being the original and premier academic essay writing provider. We are constantly looking for new ways …
END_OF_DOCUMENT_TOKEN_TO_BE_REPLACED