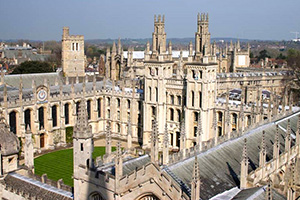 For the first time in history, a UK institution has topped the World University Rankings of Times Higher Education (THE). University of Oxford dethroned five-time winner USA’s California Institute of Technology, which now ranks second. The rest of last year’s top 10 positions have basically remained the same at the 2016-2017 standings. This is the 13th year of the prestigious ranking.

Aside from bagging the topmost spot, the UK has a total of 91 unis at the top 980. This is way higher from last year’s 78. It is only second to the USA who has 148. The University of Cambridge and Imperial College London remain unmoved at 4th and 8th places, respectively. On the other hand, University College London has fallen from 14th place to 15th this year. There are 32 UK representatives at the top 200 compared to 34 in 2015. Overall, the UK is second only to the USA for the number of representatives in the top 800.

Just like last year, Germany is third behind USA and UK as the most represented nation in the top 200. It has 22 schools, up from 20 in 2015. Netherlands is still in fourth with 13 schools, up from 12 the previous year. The West continues to rule the upper strata but Asia has slowly been showing up. The continent currently has 20 unis creeping up to the top 20.

How exactly are the institutions ranked among the world’s best? According to THE,
“The top universities rankings use 13 carefully calibrated performance indicators to provide the most comprehensive and balanced comparisons available.” This allows them to judge unis based on core missions: teaching, research, knowledge transfer, and international outlook.

According to Oxford Vice-Chancellor Louise Richardson, the key to their success is being able to recruit the best talents. The leader further added: “The best academics attract other top academics as well as smart early career academics. This basically means that through these great minds, competitive research funding is given. She also emphasised the importance of providing a good environment for academics where they feel valued and supported. She said that the uni does not take anything for granted and constantly open to innovation and ready to invest.

We at Essay Writer would like to extend our congratulations to the top ranking UK universities. You definitely make our country proud.

We immensely take pride for being the original and premier academic essay writing provider. We are constantly looking for new ways …
END_OF_DOCUMENT_TOKEN_TO_BE_REPLACED