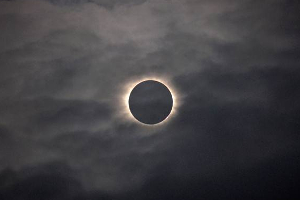 The universe gifted the USA with a rare total solar eclipse, the moon directly passing between Earth and the sun. Some other parts of the world, including the UK, got to see a partial eclipse. Referred as the Great American Eclipse, the full solar eclipse was seen from the Pacific to the Atlantic coasts. It was detectible across a span of 70 miles wide and 2,500 miles long. This is the first time since 1918 that such cosmic phenomena occurred across the entire contiguous USA. It is expected to happen again in April 2024 and August 2045.

The eclipse began over the Pacific Ocean at 15:46 GMT and reached Lincoln City, Oregon at 16:04 GMT.

Path of Totality of Solar Eclipse

There was an influx of visitors to the states that were part of the path of totality on 21st August. Various viewing events and parties have been held for people to come together in this rare occasion. Georgia, Idaho, Illinois, Kansas, Kentucky, Missouri, Nebraska, North Carolina, South Carolina, Tennessee, and Wyoming had the best views of all. Giant City State Park in Illinois experienced the longest ground duration of two minutes and 41.6 seconds. On the other hand, Cerulean, Kentucky had the greatest extent in width.

Day turned into night for more than two minutes, which drew one of the largest audiences in history. Aside from witnessing a full-on solar eclipse, sky watchers caught a glimpse of another extremely rare phenomenon. The sun rose over the Pacific Ocean while completely blocked out by the moon referred as the eclipse sunrise.

In the UK, only 4% of the sun was covered by the moon. The partial eclipse started at 18:30 GMT, reaching its maximum at around 19:00 GMT in the north, specifically in Manchester.

How a Solar Eclipse Occurs

A solar eclipse occurs when the moon passes between the Earth and the sun. It totally or partially obscures the image of the sun to the people on Earth.  The moon orbits the Earth at an average of 239,000 miles. A total eclipse happens when the moon’s angular diameter is larger than the sun and blocks all sunlight and turns day into darkness. As totality transpires in a small path on Earth, partial solar eclipse is visible over nearby parts of the world.

Did you catch a glimpse of the solar eclipse yesterday? If you are required to submit a piece of writing about this rare phenomena, we will be happy to assist you. You can get started by filling up the order form.

We immensely take pride for being the original and premier academic essay writing provider. We are constantly looking for new ways …
END_OF_DOCUMENT_TOKEN_TO_BE_REPLACED