Scientists Discover the Ability of Ravens to Plan Ahead 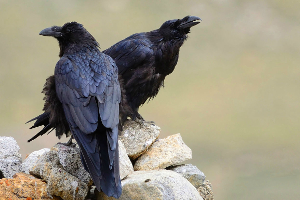 Ravens and its Corvidae relatives have always been known to be some of the smartest animals in the world. They are complex species that could remember human faces, and even understand the principle of cause and effect. New research suggests that ravens have an impressive ability used to be thought as uniquely human: planning ahead. The raven is second to the great ape to prove that this ability is not exclusively a human trait.

Ravens Plan for the Future

Researchers spotted ravens to cache food for future consumption, gather string to get hanging food and deceive one another. Some scientists disagree that food caching proved their ability to plan because birds may be biologically wired to do so. In a study published in the journal Science last 13th July, scientists get a surprising discovery. Researchers Can Kabadayi and Mathias Osvath wrote “Ravens parallel great apes in flexible planning for tool-use and bartering.” The academics from Sweden’s Lund University set up a series of experiments testing the ravens’ planning flexibility. Five ravens were used to determine how they plan during activities they don’t normally do in the wild. The same battery of tests was given to apes to prove if they have long-term planning capabilities.

The tests were mainly composed of two aspects: the use of tools and bartering. First, the ravens were trained to use a simple tool to open a box with a reward. When the birds dropped the rock through a small tube, a box opened and revealed a piece of dog food. They also took the box and presented a few “distractor” tools like a toy car, wheel and a metal pipe. Most of the ravens were successful in opening the box. Even with a 15-minute delay in receiving rewards, the ravens had an 86% success rate. It was further extended to 17 hours in between and the success rate became higher at 88%.

Markus Boeckle and Nicola S. Clayton wrote in a separate Science paper where the ravens were trained to barter. They were taught to use a token to barter with a human for a food reward. When the birds knew trading happened the next day, they opted to store their tokens. They chose the promise of bigger and tastier treats later than the immediate lesser food rewards.

Results show that ravens can indeed plan for their future needs they have never experienced in the wild. According to Kabadayi, ravens were willing to tolerate delayed gratification, which is a crucial element of human decision-making.

Did you find this post interesting? Please feel free to browse through our timely and informative blog posts. On the other hand, if you have any writing projects, you may check out our services. Essay Writer is one of the legitimate academic writing services in the UK that offer excellent quality service.

We immensely take pride for being the original and premier academic essay writing provider. We are constantly looking for new ways …
END_OF_DOCUMENT_TOKEN_TO_BE_REPLACED