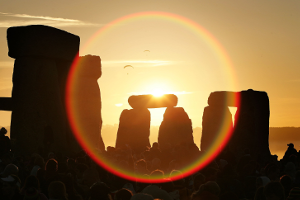 Summer Solstice is here, which marks the longest day of the year for countries in the Northern Hemisphere. The sun rose at around 4:40 this morning and will set at 9:20 in Britain tonight. It is basically around 16 long hours of daylight. Google has dedicated a Doodle for this phenomenon that officially starts the season of summer.

What is Summer Solstice?

Technically speaking, Summers Solstice happens when the sun passes directly over the Tropic of Cancer, specifically 23.5 degrees north latitude. It signals the time the sun stops going northward in the sky, and the beginning of days gradually becoming shorter. However, the slow transition to shorter days will go unnoticed. The shortest day known as the Winter Solstice will be on 21st December. The dates of the two solstices in the Southern Hemisphere are reversed, meaning today is Winter Solstice there.

Solstice comes from the Latin words sol sitere, which mean sun standing still. This basically means that the sun’s daily northward movement in the sky seems to pause before it reverses direction. The Summer Solstice is celebrated in various ways by different faiths through festivals and rituals. It is typically associated with light, fertility and growth.

In China, people associate it with earth, femininity and the goddess of light Li. In Christian faith, the feast of St. John the Baptist falls within days of the solstice. For pagans, the Summer Solstice is used to mark the planting and harvesting crops and pagan gods and goddesses uniting. The union is believed to have created the abundance of fruits and vegetables.

Summer Solstice at the Stonehenge

Thousands of pagans, druids, revelers, and tourists have flocked the ancient religious site of Stonehenge in Wilshire, England. Complete with flower garland or druids’ robes, they gathered to see the sunrise, which aligned with the central Heel Stone. A fire ritual is sometimes performed where people form a circle in a large central candle. As safety precautions in the wake of recent terror attacks in the UK, armed forces were deployed in the area.

The Stonehenge has been a place of pagan worship for centuries and is parallel to the Summer and Winter Solstices. It is believed to be a prehistoric temple that was built to mark the movements of the sun. The builders of the Neolithic monument were believed to have taken giant bluestones from the Preseli Hills in Pembrokeshire.

Tips to Prepare for Resit Exams This Summer

We know that getting ready for resit examinations does not sound appealing especially this summer. However, it is not all.

Summer graduation season is upon us and uni students who toiled for years will finally reap what they sowed. After.

Summer Solstice is here, which marks the longest day of the year for countries in the Northern Hemisphere. The sun.

We immensely take pride for being the original and premier academic essay writing provider. We are constantly looking for new ways …
END_OF_DOCUMENT_TOKEN_TO_BE_REPLACED