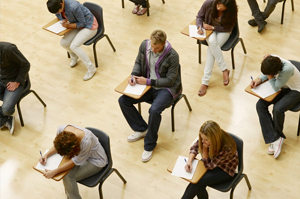 Cambridge university candidates were sitting a second year Physics paper last Saturday which has been found to contain a vital typo error making the question on two problems impossible to answer.

An hour into the exam passed before a student realised the absence of a variable required to solve the problem and brought it to the attention of the examiners.

The question involved an equation of a “commutation relation and a factor of sqrt(-1) in a spin-operator matrix”. The important ‘i’ symbol needed to calculate the answer was missing from the information students were given to work with.

Around 300 students took part in the exam and an estimated 75 per cent of them attempted to solve at least one of the two questions containing the error.

“Some people would have just skipped those questions without attempting them – but they still got extra time.

“The time I wasted on that question plus the extra panicking was way more than 15 minutes.

“The mistakes themselves weren’t huge but it also made me question whether there were other mistakes.”

Another student added: “All I can say is thank you to the genius who had enough brains and courage to realise the mistake and point it out to the examiner.

“I could have spent all afternoon on it.”

A university spokesman acknowledged the error in a statement and said: “We regret that there were two typographical errors in the Part IB physics examination sat on Saturday 25th May.

“The examiners will ensure that no candidate is disadvantaged.”

This error brings to mind a series of mistakes in British higher-level exams. Two years ago, Ofqual was asked to investigate after an AS-level paper on geography and a GCSE business studies paper were found to contain questions that were impossible to answer. The inquiry led to the AQA exam body apologising and awarding full marks for the faulty questions to all students who sat the exam.

What would you have done if you were one of the students sitting the Cambridge paper containing faulty questions? Have you ever experienced sitting on an exam and finding a question with a mistake? Share your thoughts on this issue by leaving a comment below.

We immensely take pride for being the original and premier academic essay writing provider. We are constantly looking for new ways …
END_OF_DOCUMENT_TOKEN_TO_BE_REPLACED