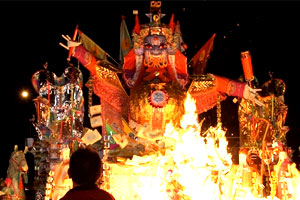 Chinese communities celebrate the Ghost Festival starting from the 15th of the seventh month in the lunar calendar. They believe that ghosts are freed from hell during this time in search for food, rest and fun among humans. Also known as the Hungry Ghost Festival in modern times, this religious festival is a month-long celebration around the world.

In Chinese culture, the living would pay homage to their deceased ancestors during the Ghost Festival. Buddhists and Taoists perform rituals that would absolve the sufferings of the dead. They believe that the realms of heaven, hell and earth are all open at this time. Inherent to the Ghost month is the reverence of the dead. This is where traditionally, the familial piousness extends to their ancestors even after their deaths.

The main activities include the preparation of ritualistic food offerings and burning of incense. Meals offered to the dead are usually elaborate vegetarian ones. They are served with empty seats, treating the deceased as if they were alive. People also burn joss paper or ghost money and a papier-mâché form of gold, clothes and others for visiting ghosts. Descendants would also release miniature paper boats and lanterns on water. This somehow gives directions to the lost ghosts and spirits.

People who celebrate this festival believe that there are things and actions considered to be taboo for the entire month. According to them, wearing red is a no-no because it attracts unwanted ghosts. Swimming is also prohibited as drowned evil spirits might try to drown others for them to rebirth. Those who get married, move to a new house or start a new business will experience bad luck. People born on the seventh month should avoid celebrating their birthdays at nighttime. People are also not allowed to go out after 12 midnight or sleep near mirrors and reflective surfaces.

Ghost Festival in other countries

The Ghost Festival has a common objective but is celebrated differently in other parts of the world. In Singapore and Malaysia, people offer concert-like performances called Getai ‘Koh-tai.’ Groups of singers, dancers and other entertainers perform at temporary stages within a residential district.

In Taiwan, opening the gate of a temple commences the first day of the seventh month. This symbolises the opening of the gates of hell. They light the lamps on the main altar on the 12th day and hold water lantern processions on the 13th. Unlike in China where the dead ancestors are welcome, their offerings are to avoid spirits from visiting them. These offerings include food, paper money and incense.

In Japan, their version of the Ghost Festival is called Obon or Bon. They used to hold dance festivals called Bodori in the past. Now, it has already been altered over time simply into a family reunion holiday. People from big cities go back to their hometowns to visit and clean their ancestors’ resting places.

In Vietnam, this festival is called Tháng Cô Hồn, which is the month of lonely, unlucky and haunted spirits. It is considered the time to pardon the condemned souls who are released from hell. The living are also valued so the homeless are given food, and birds and fish are released for everyone’s benefit.

We at Essay Writer would like to wish Chinese students a successful and safe Hungry Ghost Festival. If you need an essay or report about this festival or other celebrations, we will be happy to assist you. We have expert writers in various subjects that will create original works based on your requirements. To get started, please fill out the order form with your guidelines/instructions.

The Triumph Over Darkness: Diwali Festival 2017

The Hindu Festival of Lights referred as Diwali Festival is an annual celebration in autumn. The five-day brightly-lit festivities around.

Colourful, well-crafted wooden dragon boats fill the waters of China and Chinese communities in various countries today, 30th May. This.

Are you familiar with the Double Ninth Festival? 9th October is a special day for Chinese communities all over the.

We immensely take pride for being the original and premier academic essay writing provider. We are constantly looking for new ways …
END_OF_DOCUMENT_TOKEN_TO_BE_REPLACED