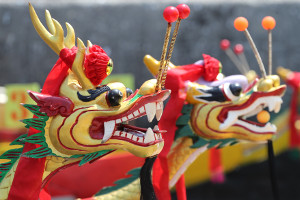 Colourful, well-crafted wooden dragon boats fill the waters of China and Chinese communities in various countries today, 30th May. This is for the Chinese Duanwu Festival, known in western countries as Dragon Boat Festival. It is a yearly celebration held on the 5th day of the 5th month in the Chinese lunar calendar. This is the reason why it is also called the Double Fifth Festival.

This cultural festival is a public holiday in the Republic of China, Hong Kong, Macau, and Taiwan. After gaining worldwide recognition, Dragon boat racing is considered a commanding sport in many countries such as the United Kingdom, Japan and Vietnam.

Duanwu Festival Celebrations around the UK

The Cambridge Chinese Association holds one of the biggest annual Duanwu Festival celebrations in the UK. On 27th May, 12 teams departed from Jesus Green early in the morning to compete in five races. Cambridge went head-to-head with Oxford at the Cam. The former won in the Oxbridge race but Oxford was the tournament’s overall champion.

The event planners were pleased with the outcome of the sunny affair, having almost 1,000 people in attendance. Spectators enjoyed some celebratory food and drinks with the zongzi or sticky rice as the main attraction. As a family event, there were majestic Chinese dragon dancing and entertaining activities for the kids. Organiser Andy Tse told the Cambridge News: “Everyone seemed to have a great time, which motivates me to host it again next year.”

Another major annual Duanwu Festival celebration in the UK is organised by the London Chinatown Lions Club. It is supported by The Hong Kong Executives Club, The London Chinatown Chinese Community Centre, and the Hong Kong Economic & Trade Office. This year’s celebrations were held on 25th May at the London Rigatta Centre. The main objective of this free event was to provide “an excellent opportunity to experience Chinese culture.” Organisers promised a more competitive format this year for their dragon boat race, which is also a fundraising activity.

The Duanwu Festival is an ancient Chinese tradition that dates back more than 2,000 years. It is believed to have originated in ancient southern central China along the banks of Yangtze River. Some say the first participants were superstitious villagers who celebrated the fifth day of the fifth lunar month. They held races to trigger rains for prosperity and avert misfortune.

Others believe the festivals are held to commemorate the death of poet and minister Qu Yuan of the Zhou Dynasty. He was beloved by the local people, who raced out in boats to save him when he committed suicide.

Essay Writer would like to wish our Chinese friends a happy Duanwu Festival celebration!

We immensely take pride for being the original and premier academic essay writing provider. We are constantly looking for new ways …
END_OF_DOCUMENT_TOKEN_TO_BE_REPLACED