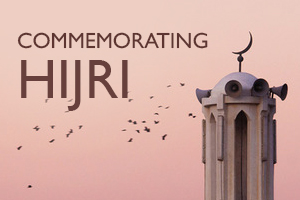 Islamic New Year, also known as Hijri New Year, falls on 2nd October this year. Muslims worldwide commemorate their second holiest month, next only to Ramadan. Despite this, this is considered a cultural event, rather than a religious one.

Just like other Islamic holidays, the celebration dates differ each year based on the phases of the moon. Hijri New Year marks the first day of a new Islamic calendar year. On the other hand, the first month of the lunar calendar is called the Muharram. The Islamic New Year in 2017 is estimated to fall on 22nd September.

Some Islamic organisations use local sightings of the moon to determine the new month. However, most countries and institutions follow astronomical calculations with various schemas. The tabular Islamic calendar is calculated differently, which causes one- or two-day differences than lunar sightings.

This 2016, the Hijri signifies the start of the Islamic year 1438. It enables Muslims to reflect on what they want to do with their lives. Before the prophet Muhammad, the founder of Islam arrived, New Year denoted a month of non-violence. At this time, tribesmen would lay down their weapons and had a ceasefire.

Furthermore, the word Hijri celebrates Muhammad and his followers’ migration from Mecca to Medina. At that time, the non-Muslim Quraish oppressed the people in Mecca. They were able to establish a place where they could freely practice their religion and grow as a community. According to Islam experts, this event became significant because it was the beginning of a new era. Thus, the Islamic year began in 622 AD.

Most Muslim countries such as the United Arab Emirates and Malaysia will enjoy a three-day weekend. In the UK, there won’t be a time off since this is not considered a bank holiday. Hijri is mainly a low-key event compared to the two major festivals of Eid-ul-Fitr and Eid-ul-Adha.

Customs and traditions to celebrate the Muharram differ from Sunni and Shia Muslims. The holiday is usually celebrated through prayer sessions in mosques and being with family. According to religious scholars, emphasis should be on reflection, gratefulness and remembrance.

We at Essay Writer wish all Muslim students a fruitful Islamic New Year! If you need assistance in writing an essay about this event or other topics, please feel free to contact us. You may also fill out the order form to get started.

We immensely take pride for being the original and premier academic essay writing provider. We are constantly looking for new ways …
END_OF_DOCUMENT_TOKEN_TO_BE_REPLACED