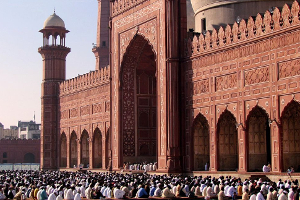 It is the time of year for Muslims to celebrate the Eid al-Adha or the Festival of Sacrifice. This is also the culmination of the Hajj, a pilgrimage to Mecca attended by more than 1.7 million people. Through a crescent moon sighting on 22nd August, Saudi Arabia’s High Judicial Court confirmed celebrations start on 1st September. The four-day celebrations of the Greater Eid, with Eid al-Fitr being the lesser Eid, end on 5th September.

Different interpretations mean the start of the festival can vary depending on the sect, mosque, region, or country. For instance, Pakistan and India will begin their festivities on 2nd and end on 6th September. Muslim countries often start their public holiday the day before.

The Greater Eid is a holy time of sacrifice and generosity. It honours the devotion of Ibrahim (Abraham to Christians and Jews), and his commitment in sacrificing his son to God. Despite temptations from Satan, he went on with it. God had mercy on him sent an angel to replace his son with a goat.

Observance of the Eid al-Adha

The Eid al-Adha often begins with morning prayer, a meal and an exchange of gifts with family and friends. Traditional dishes like Turkish baklava, Indian rice pudding, biscuits and desserts are served. Aside from sharing a big meal with loved ones, it is a great time for reflection and kindness. Food is also given to those who couldn’t afford. It is also obligatory for Muslims to wear their finest clothes as they consider this event a gift from Allah. They should not worry about their problems and instead be glad to be part of a community.

The traditional celebration of the Eid al-Adha involves a goat or sheep sacrifice, and the meat will be divided into three. One third goes to the household, another third to relatives and friends, and the remaining third to the poor. Those who intend to sacrifice an animal in the UK must conform to welfare standards. However, according to some Muslim scholars, the actual slaughter may be omitted and people should instead donate money to charity. The organisations will be the ones to distribute meat to the needy. The meat, referred as Qurbani (sacrificial) does not necessarily have to go to Muslims.

Muslim communities in Birmingham hold the Lesser Eid and Greater Eid celebrations annually. Instead of holding the Eid al-Adha gatherings at Small Heath Park, it will be at the Masjid, Insha’Allah on 1st September. The organisers opted for an indoor event since the ground is unfit for prayer mats and facilities due to constant rain. Also, unlike the Eid al-Fitr celebrations, there will be no food stalls, funfair or family activities.

Worshipers are asked to have their Eid prayers at their local mosques. A spokesman said via Birmingham Mail: “Substantial roadworks and traffic disruption around the park and in surrounding areas would also make gaining access to the park tumultuous for both pedestrians and drivers alike. We apologise for any inconvenience caused and hope you can join us for Eid Salah at the Masjid.”

We immensely take pride for being the original and premier academic essay writing provider. We are constantly looking for new ways …
END_OF_DOCUMENT_TOKEN_TO_BE_REPLACED