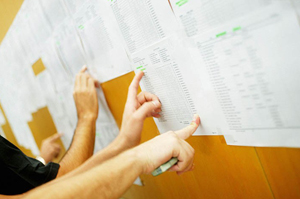 A survey of 800 schools by the Association of School and College Leaders (ASCL) found that 87% had complaints about the GCSE English results, which saw a huge majority of secondary school students unable to get C grade passes due to last minute changes to the English GCSE grade boundaries.

The strong reaction was due to the fact that grade boundaries were raised for pupils taking the exams in June compared with those marked in January, which means that they would have got a C grade had they done the exact same work then instead of getting a D in the latest results.

An assessment of exam results last week showed that the number of A* to C grades awarded fell for the first time since the exams were introduced 24 years ago. Figures show pass rates for some modules were raised by as much as 10 per cent. Government representatives insist the move was made to address dramatic grade inflation over this summer’s results, noting that January exam boundaries were “too low”. Last month, the government recommended technical and regulatory solutions to address grade inflation in recent years.

To address concerns, exams regulator Ofqual is launching an investigation into the matter and will be meeting with exam boards and unions this week. It is taking evidence about the marking from teaching organisations and is expected to make a further statement of its intent. Exam also boards brace for legal actions and appeals from the affected pupils, their parents and schools.

However, ASCL secretary general Brian Lightman said that papers do not need to be remarked. Instead, grades should be reissued based on January grade boundaries. The National Union of Teachers agrees, saying that re-grading, instead of re-marking will “put right the injustice” done to almost 10,000 teenagers all over England and Wales affected by this issue.

We immensely take pride for being the original and premier academic essay writing provider. We are constantly looking for new ways …
END_OF_DOCUMENT_TOKEN_TO_BE_REPLACED