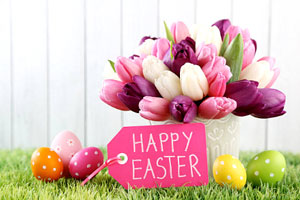 Cute bunnies and colourful eggs are usually the commercialised symbols often associated with Easter. For Christians, Easter Sunday is the celebration of the resurrection of Jesus Christ from the dead. In the UK, a four-day Easter weekend starts on Good Friday and ends on Easter Monday. The aforementioned days are both bank holidays.

Easter in Christianity focuses on Christ’s resurrection from the dead. According to the New Testament, the resurrection is the foundation of the Christian faith. When Christ rose from the dead, He established His role as the powerful Son of God. In addition, it is not merely a one-day observance but rather an entire season referred as the Eastertide. Beginning on Easter Monday, it lasts 50 days until Pentecost Day. It includes a celebration of the ascension of Jesus into heaven.

Easter precedes Lent, a 40-day period for reflection and penance, signifying the 40 days of Christ in the wilderness. Holy Week comprises the Easter Triduum that commemorates the Last Supper, as well as the crucifixion and death of Christ. Easter is usually associated with the Jewish Passover due to its symbols and location in the calendar. Many languages for both Easter and Passover have similar meanings.

Unbeknown to some, the Easter egg is actually of Christian origin. Early Christian Mesopotamian communities stained eggs with the colour red. The egg symbolises the empty tomb after Christ’s resurrection. Modern and commercialised Easter eggs are more colourful and enchanting to entice kids for Easter egg hunting.

It is believed that Easter was a pagan celebration that existed long before the rise of Christianity. Easter is said to have come from the belief in Anglo-Saxon goddess of spring and dawn named Estre. During the second century, Christian missionaries converted northern tribes in a surreptitious manner. They allowed them to continue their pagan celebrations in a Christian way. Coincidentally, the celebration of the resurrection of Jesus and the pagan festival occurred at the same time. As pagans were slowly converted to Christianity, their festival remained but was changed to Easter.

We immensely take pride for being the original and premier academic essay writing provider. We are constantly looking for new ways …
END_OF_DOCUMENT_TOKEN_TO_BE_REPLACED