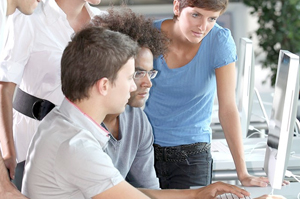 Another set of figure is setting the government’s wheels into motion. The mission behind the figure is fundamentally about seeking employer’s perspectives regarding today’s labour market – the youth’s skill, or lack thereof.

A total of 1,000 employers, from small, to medium and large-scale businesses, had been invited to participate in the poll. Recruitment managers, on the other hand, had been more than happy to oblige. Backing behind the survey were two entities: the City and Guilds and the Edge Foundation.

The results of this poll formed the basis of the UK government’s solutions.

The central concepts behind the poll consisted of the existing apprenticeships and subsequent skills. Recognising the employers as important stakeholders, the government has launched the poll with the employer in mind, figuratively assigning them to take hold of “the driving seat.”

To achieve this, according to the Department of Business Innovation and Skills spokeswoman, the “apprenticeship system” shall be further sensitised in quality. It will be simplified to see through the ultimate benefits of employers (and students).

Setting out the “clear and coherent set of reforms,” apprenticeships are designed to effectively affect students’ career. This reform is anticipated to ripple among all educational levels, from schools to colleges, as well as, in the workplace.

Employers’ role has been expanded to accommodate the careful development of apprenticeships standards. The participating employers (an estimate of 60 among 8 sectors) shall make up the pioneering Apprenticeship Trailblazers. The government is currently looking over the expansion of sectors and employers to invite in this standards-development.

The major sentiment, as revealed by the poll, should encourage existing and upcoming students to stock on work experience and skills.

Over half (53%) said they valued vocational qualifications in prospective employees above academic attainment.

Edge Foundation’s Jan Hodges can’t help but chime in. He stated what students needed in the context of filling up skills gap and subsequently, not becoming part of the unemployment stats: they needed the “right training and encouragement.”

The Confederation of British Industry had not been so kind in its critical attack against the education system. The system had pushed students in a single route – the “default university” – while taking no effort to prod some towards vocational education.

City and Guilds chief executive, Chris Jones, on the other hand, widened the scope to blame. Instead of the education system, his deduction brought about the more-general “society.”

The resulting poll figures are inclusive of the following:

Employers, specifically, half of them, finds the existing education system unable to produce students whose skills match their standards. Unsurprisingly, a third of these businesses consider “skilled workers from abroad.”

The latter is already posing immigration issues, which in itself added pressure to the retrofitting of the education system.

To what extent will these apprenticeships’ standards benefit the employers and students?

We immensely take pride for being the original and premier academic essay writing provider. We are constantly looking for new ways …
END_OF_DOCUMENT_TOKEN_TO_BE_REPLACED