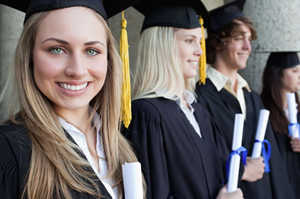 In a move brought about by the economic recession, more and more people, including graduates find it difficult to find jobs. Last month, the Office for National Statistics released data suggesting recent degree earners are more likely to find themselves in low-skilled jobs than they were a decade ago. More than a third of recent graduates found themselves having non-graduate jobs at the close of 2011, a significant difference from about a quarter back in 2001.

Rather than face the possibility of not earning any income altogether, many degree holders find it a better option to take on jobs that are below their qualifications. However, this may hinder their career from taking off. A study to be published later this week found graduates who settle for careers below what a degree holder is qualified for can find themselves unable to move on from low-skilled employment for years.

The research by the New Employment Foundation found that one in four graduates who take jobs that can be given to non-graduates can find themselves staying in the same position even after three and a half years. The study also found the reverse to be true, finding “a strong positive relationship” between those who found jobs for graduates six months after earning their degree and three years later.

The report implies underemployment—where employees agree to working longer hours or taking jobs requiring higher skills than they do—is a trend likely to continue even after economic recovery. Between jobs and the salary they command, chances for getting low-paid employment and high-ranking jobs are better, but employment with median pay remains difficult to find.

The report says recent graduates find themselves in a “perfect storm”. Underlying cracks in the labour market such as pay polarisation have become evident.

The study found that stiff competition for landing jobs has created a “bumping-down effect” where graduates hold a bit of an advantage by getting lower-skilled jobs and those with few or no qualifications are further pushed away out of the labour market. It says: “Even those with good graduate degrees are facing months of unemployment or free interning in order to gain access to paid work. Those with no or few qualifications are being left out in the cold.”

What do you think would be a solution to help graduates get better chances at having employment and pay suitable to their qualifications? Let us know by leaving a comment below.

We immensely take pride for being the original and premier academic essay writing provider. We are constantly looking for new ways …
END_OF_DOCUMENT_TOKEN_TO_BE_REPLACED