Hanukkah Coincides with Christmas this Year 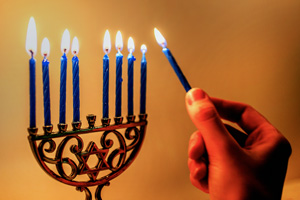 For the first time since 2005, the first night of Hanukkah will coincide with Christmas this year. The only difference is that more than a decade ago, the Jewish holiday started on Christmas Day, 25th December. This time, it will begin at sunset on Christmas Eve, the 24th. This 8-day holiday will end on the evening of 1st January.

Also called the Jewish Festival of Lights, Hanukkah is generally celebrated in November or December. The Hebrew calendar determines the dates, which begin on the 25th day of Kislev or the ninth month. It ends on the 2nd or 3rd day of Tevet or the 10th month of the ecclesiastical year. Unlike the Gregorian calendar that starts at midnight, the Jewish day commences at sunset.

Some people think that Hanukkah is the Christmas of Jews. This is actually far from the truth as this celebration came before the time of Christ. Also known as Chanukah, Hanukkah comes from a Hebrew word that means rededication. The Jews commemorate on this day their religious freedom from the imperial power of Syria. A group of Jewish warriors referred as the Maccabees led this victory in 167 BC and regained control of Jerusalem.

King Antiochus took over the Second Temple in Jerusalem and built an altar to Zeus. He banned Judaism and circumcision, and ordered pigs to be sacrificed at the altar. Judah Maccabee, whose name means Judah the Hammer, led a Jewish rebellion. This victory is referred as the Maccabean Revolt.

Jews celebrate this festival by lighting a special candelabrum called a Chanukiah, typically has eight branches with additional distinct branch. They light one candle for each night until eight candles are lit for the final night. The extra branch called shamash, which means attendant, is used to light the other branches. It is given a distinctive location, typically above or below the others. Oil-based foods such potato pancakes, latkes and doughnuts are eaten. Both traditions go back to the miracle when one bottle of oil lasted eight days during the rededication.

They also play the dreidel, a spinning top with four sides. Legend has it that during the time of the Maccabees, kids were forbidden to read the Torah. They defied this decree and studied anyway. When officials approached, they put away their books and pretended to play their spinning tops.

British Prime Minister Theresa May has released a Hanukkah message, vowing to stand by the Jewish community. She emphasised on fighting against prejudice in all its forms, specifically on religious freedom. She said: “For just as the Maccabees resisted oppression and kept their faith, to be rewarded by the miracle of a light that burnt for eight nights, so too must we today have the courage to stand up for our values and hold sacred our way of life.”

She assured the Jews that as long as she is Prime Minister, she will stand by them. She will be there to defend their right to freely practice their faith. She stressed out the significance of the Jewish community and its contribution to Britain. She added that Britain will not be what it is today without the Jews.

We immensely take pride for being the original and premier academic essay writing provider. We are constantly looking for new ways …
END_OF_DOCUMENT_TOKEN_TO_BE_REPLACED