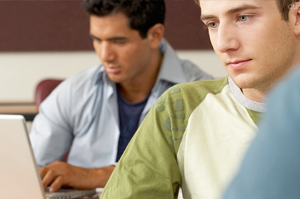 In the past and even at present, people whine over the small number of women in particular sectors. This incites the unleashing of feminist movement and the inevitable threading on eggshells. Ironically, this growing ‘minority’ had befallen today’s university male students.

As a consequence, educational institutions might need to reconsider the status to which they look at the male’s declining number. A “coordinated outreach campaign” might also be set as a solution.

What the figures say

Pedalling a bit back, what were the figures that brought about these warning and forecasts?

The chorus among these figures is obvious: women are “a third more likely to gain entry to degree courses than men.”

While the figures are dismal for the male counterparts, this is not the case for all degree courses. One particular factor helps in determining the extent of the gap, as well as, its complete reversal. The factor is none other than the course itself.

The Guardian correspondent, Rebecca Ratcliffe, had pointed out these variations in accord to course types here:

So, where do these observations really bring the UCAS’ findings? Apart from the ever-prevailing bias against particular course degrees, culture could be seen as another camouflaging culprit (according to Higher Education Policy Institute director, Bahram Bekhradnia).

While educational institutions and authorities are yet to explain the reason behind the fall of university male students, the case for the female counterparts is less ambiguous.

Female students are observed to aggressively work on their uni qualifications. In particular, they are seen to have taken as much A-level subjects as they can possibly obtain. This, according to Centre for Education and Employment Research director Alan Smithers, makes female students a lot more qualified “on nearly three-quarters of university courses…”

Mary Curnock Cook’s warnings rang clear, as are her recommendations. However, in order for institutions and other stakeholders to act on this, the impacts of the male-minority group has to be taken upfront and be scrutinised.

We immensely take pride for being the original and premier academic essay writing provider. We are constantly looking for new ways …
END_OF_DOCUMENT_TOKEN_TO_BE_REPLACED