One in Every Three Jobs Taken by Graduates are Non-Professional; Statistics Confirm Degree Still One Best Way to Employment 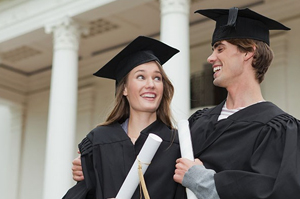 A recent Statistical First Release from the Higher Education Statistics Agency show that in 2011-12, more than one third of new graduates working in the UK took on non-professional jobs within six months after graduation. But for universtiy think tank million+ chairman Prof Michael Gunn, the numbers indicate that studying for a degree, both full-time or a part-time, is still one of the best ways to land a job even in a difficult labour market.

Prof Gunn says further that six months between graduation and the survey is not enough time to be able to give a judgment regarding the true value of having a degree and the jobs that graduates will have later in the future. Around 25% of full-time first degree UK and EU university leavers took on jobs inside and outside UK which do not require a degree, six months after their graduation.

University and College Union president Simon Renton adds that well-educated workers are still highly sought-after and will more likely to fare better in the current economic climate. He adds that if the UK wants to be a major player in international graduate jobs market, the country should invest in skills at both university and college level.

The demand for workers who are both highly-skilled and highly educated at the same time continues to rise faster than the supply, Mr Renton relates. He cites that a report recently released this week involving the education systems of 43 countries shows that the employment chances of graduates is three times more than job applicants having qualifications which are lower.

In the same six months frame, 41% of the defined population landed graduate level jobs in the UK, 22% took on jobs in the UK that does not require a degree and 9% went unemployed. Of the 232,110 total, 15% went to full-time further study, 6% combined work and further study, 3% worked overseas and other ventures combined for around 4%. These numbers involve only the graduates whose destinations were known.

Among the 57,785 graduates who took on jobs which does not require a degree, the largest group are those who took on sales and customer service positions at 21,025 or 13% of those who got work including graduate level occupations. Other non-professional vacancies taken on by the graduates are 13,785 administrative and secretarial occupations; 10,555 caring, leisure and other service jobs; 9,695 elementary occupations; 1,980 skilled trades work and 745 process, plant and machine operatives.

The “professional occupations” in which graduates have successfully entered include jobs as veterinarians, dentists, pharmacists, engineers, teachers and solicitors.

The 9% unemployed of the batch within the six months period translate to 20,415 graduates of their first university degree. Unemployment rate for women are better than the men’s. The former are doing better in the job market with only 7% going jobless in the time span while unemployed percentage for the latter is 11%. Numbers in this area are the same last year but they are not directly comparable because of the different ways in which they were collected, the agency says.

What comments can you give regarding the six months time span after graduation which is being used in the survey? What do you think about the fact that graduates are willing to do non-professional and elementary jobs? What implications could this have?

Times Higher Education (THE) 100 Under 50 Rankings has been finally released.  The rankings saw an interesting tipping over of.

Finally, the month of February is showing some love to the graduating class of 2014.  This “love” comes in the.

Figures that make up the latest labour market data represent two sides of a coin. The first sounded like a.

We immensely take pride for being the original and premier academic essay writing provider. We are constantly looking for new ways …
END_OF_DOCUMENT_TOKEN_TO_BE_REPLACED