University Degree Even More Valuable Amid the Recession 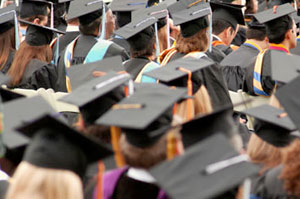 The university degree is still one best way to get the best jobs and foundation on which to build a rewarding career; the graduate jobs market is recovering after the recession; and employment rates are better measured three and a half years after graduation compared to six months after the same reckoning point. These are what authorities say regarding the results of a survey conducted by the Higher Education Statistics Agency.

Value of the University Degree

Universities minister David Willetts say the results of the survey show that the university degree continues to be an excellent investment towards getting ahead in life through the better jobs it can afford its holders. He points out that the value of the qualification has been emphasised even more during the period of the recession as graduates are largely preferred over job applicants who are non-graduates.

The comment of the minister of higher education was affirmed by that of the vice chancellors group Universities UK chief executive Nicola Dandridge. The latter noted that the figures from the survey indicate that the graduate jobs market has recovered after the recession. A degree from a UK university is what employers in the country and around the world are looking for in applicants. She adds that UK university graduates are projected to continue being given higher salaries than employees who are not degree holders. To begin with, the former have greater chances of being hired.

The head of the vice chancellors group says that three and a half months from graduation being the time span after which the survey was conducted is better than six months being used in other studies. Such gap also yields more useful results. Ms Dandridge emphasises that some graduates do not aim to work immediately after graduation but proceed to further study, go to trainings that will give them working experience or travel to one or more places for different reasons including exploring other options in life. She adds that most of these graduates eventually apply for jobs, get hired and substantially add to the graduate employment rate.

Despite graduating during the height of the recession, only a very small percentage – 3.2% – of the class of 2009 are unemployed three and a half years completing their education. Batch 2007 turned in a higher rate when it was surveyed in 2010. Still the present survey feature more unemployed graduates than the one in 2008 involving the graduates of 2005.

In the HESA survey, in which 60,000 graduates were the respondents, the career satisfaction rate for the 2009 batch is more than 80%. 66% said their degree in the specific discipline they are in is worth the money they have invested. Further breakdown of the numbers include 87% are in jobs three and a half years after leaving university at the end of the 2008-09 academic term. Those who proceeded to further studies total 6.7% of the population and 3.2% falling in the unemployed group. The unemployment rate of the class six months after graduation was 7.2%.

Is the three and a half years being used by HESA in the survey the best timing in measuring unemployment? What do you plan to do six months after graduation? Do you feel you are getting your money’s worth in the course you are in or the degree you have completed, as the case may be?

We immensely take pride for being the original and premier academic essay writing provider. We are constantly looking for new ways …
END_OF_DOCUMENT_TOKEN_TO_BE_REPLACED