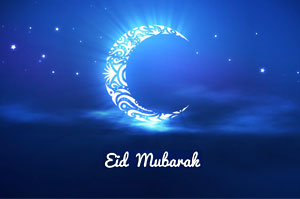 The first sighting of a new moon signifies the Eid al-Fitr, which is the official end of Ramadan and the first day of the month of Shawwal. Muslims around the world celebrate this conclusion of the holy month of fasting and the start of a feast that will last up to three days. It is also known as the Feast of Fast-Breaking and the Lesser Feast. It is one of the two major Islam Festivals, with Eid al-Adha or Sacrifice Feast being the holier one.

Unlike in other non-Muslim festivals, the date to celebrate the Eid al-fitr through the Gregorian calendar may not be predicted precisely. A confirmed sighting of the new moon marks the start of Eid al-fitr and since it may be seen at different times in specific places, Muslims may begin celebrating on two different dates.

Astronomical predictions have indicated that Eid will either be held on 5th or 6th July. Religious authorities from Arab countries announced on Monday, 4th July that the Eid would officially be on Wednesday, 6th July after failing to sight the new moon. Most celebrations in the UK have been previously scheduled on the 6th as well.

The Eid al-Fitr typically starts with an early morning prayer at a mosque or outdoor prayer ground. This special time signifies forgiveness of their sins and thanksgiving to Allah. People dress in fine clothes and hold gatherings among family and friends. They donate food and money to the poor as well.

The London Central Mosque, located on the border of Regents Park, is a great location for prayer during the end of Ramadan. More than 40,000 Muslims attend and pray in the morning. The mosque is known to provide free 2,000 hot meals and hold activities for kids.

The Eid al-Fitr is not a bank holiday in the UK; however, businesses owned by Muslims may be closed or have shortened hours. Also, some offices and schools, particularly in places with high Muslim population, give time off to Muslim employees and kids.

Eid in the Square

Already on its 11th year, the Eid in the Square in Trafalgar Square, London is the biggest annual festival dedicated for Eid al-Fitr in the UK. This gathering aims to bring together diverse Muslim communities, as well as allow non-Muslims to experience Islamic tradition.

Held on the first Saturday of the end of Ramadan, the Eid in the Square will take place on 9th July this year. Around 25,000 participants are expected to take part on this free event that will showcase the Muslim culture and cuisine from Saudi Arabia, Turkey, Lebanon, Malaysia, and Egypt, among others. Aside from Qu’ran recitations and prayers, some of the highlights of this event are the music performances, celebrity appearances, a fashion show, speeches, workshops, and a lot more. This event that is sponsored by the Mayor of London also has activities dedicated for children like storytelling, theatrical performances, calligraphy, Islamic art, face painting, and arts and crafts.

Various Eid events in the UK have been cancelled due to racial tensions building up over the Brexit vote. One of the biggest ones not pushing through is the prayer event in Southampton with an expected attendance of 2,000 people. The British Bangladesh Cultural Academy (BBCA) decided to cancel the celebrations “for the good of all communities” after a local organization called Pie and Mash Squad held anti-immigration demonstrations last Saturday, 2nd June. The Refugees Welcome and Southampton AntiFa later on organised a much larger counter-demonstration to the extremist South Coast Resistance group.

After the UK’s vote to exit the European Union, UK’s National Police Chief’s Council (NPCC) has recorded a shocking 500% rise in hate crime incidents, mostly related to anti-immigrant abuses. From a weekly average of 63, it has increased to 330 cases. The Muslim Council of Britain has recorded 100 hate crimes against Muslims.

We at Essay Writer would like to wish all Muslim students and their families in the United Kingdom a safe Eid al-Fitr. Eid Mubarak!

We immensely take pride for being the original and premier academic essay writing provider. We are constantly looking for new ways …
END_OF_DOCUMENT_TOKEN_TO_BE_REPLACED