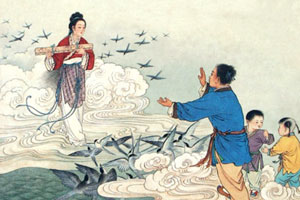 Qixi Festival, which is the Chinese Valentine’s Day, falls on 9th August this year. It takes place on the 7th day of the 7th month in the lunar calendar. This is the reason why it is also called the Double Seventh Festival.

As we continually extend our writing assistance to Chinese students in the UK, let us share the story behind it.

The origin of the festival comes from the forbidden love of Zhinü, a weaver maid and Niulang, a cowherd. Zhinü was a goddess who came down from heaven to look for something fun to do. She became a weaver maid and fell in love with Niulang. The two got married without the knowledge of the Goddess of heaven. They also had two sons. When the Goddess found out that her seventh daughter married a mere mortal, she got angry and ordered Zhinü’s return.

Niulang, together with his sons, was able to go to heaven by putting on the skin of an ox. The Goddess became furious and created a Milky Way between the lovers. A river had separated the lovers forever. However, every year on the 7th of the 7th month, magpies would take pity on them. They would form a bridge to heaven and allow them to see each other for one night.

The story of The Weaver Girl and the Cowherd has been celebrated since the Han Dynasty. As told in the Classic of Poetry, the earliest known reference to this legend is over 2,600 years ago.

How Qixi Festival Celebrations Then and Now

The customs of this festival widely varies, depending on regions. However, everyone cherishes the same hope. Many of the customs are practiced in rural areas, slowly disappearing and no longer observed in other places. The most common olden custom was for girls to pray to Zhinü to provide them with wisdom and sewing skills. Girls competed among each other in sewing and weaving during the festival. Paper gifts for burning were offered in the local temple. Aside from this, they also prayed to find love and become good wives.

On this day, the Chinese would gaze into the sky looking for the celestial couple shining in the Milky Way. Newly wed couples also took part on the festival. This stood as a symbol for a happy marriage, as well as showing that the family treasures the married woman. Young, single and married women would offer tea, fruits, flowers, and face powder. Half of the face powder would be thrown on the roof and the other half divided among the women. This means that young women will be bound in beauty with Zhinü.

The Qixi Festival today is most popular with the young. They celebrate it like the Westerners celebrate Valentine’s Day. This usually involves going out on a date, eating at restaurants and giving of flowers, chocolates and jewelry as gifts.

The traditional customs may not be practiced anymore but the story is still passed down from generation to generation. For some, the tale of Zhinü and Niulang goes deeper than a celebration of love. It also inspires couples in long distance relationships. China Exchange in the UK has been holding a 3 Channel video installation to celebrate this festival. It features London-based Chinese filmmaker Xiaowen Zhu’s creation entitled Distance Between. This is held at 32 A Gerrard Street, London from 5th to 9th August. This free showcase tells the stories of 6 people in long distance relationships sharing their joy and hardship.

Meanwhile, Music Dish China has released its Valentine-themed playlist celebrating Zhinü and Niulang. This year’s theme is also about the enduring long-distance relationships of Chinese couples around the world. The best songs have been gathered from the submissions to a call-for-songs in July. It features songs from the UK, USA, Canada, France, and Italy.

We immensely take pride for being the original and premier academic essay writing provider. We are constantly looking for new ways …
END_OF_DOCUMENT_TOKEN_TO_BE_REPLACED