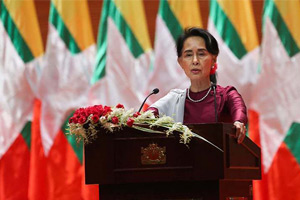 After weeks of growing violence in northern Rakhine state, Myanmar’s de facto leader Aung San Suu Kyi has spoken. She delivered a controversial speech regarding the ongoing crisis against Rohingya Muslims. She said she did not fear the global scrutiny with regard to how her government is currently handling the crisis. She said: “I think it is only fitting that I should remind you today that our government has not yet been in power for even 18 months.” Before this, leaders from the UK, USA, Canada, France, and Australia urged the leader to condemn violence.

More than 400,000 Rohingya recently have left the country and took refuge in neighbouring Bangladesh. This is to escape from what the United Nation dubbed as “ethnic cleansing.” Those who who fled shared horrific stories of indiscriminate killings, torture, rape, and arson by the military in Rakhine state. This is where majority of the Rohingya, the majority-Muslim ethnic group living in the Buddhist nation of Myanmar (Burma) live. They are often described as the world’s most persecuted minority.

The Rakhine has a long history of intermittent strife and violence. However, the ongoing crisis started after an armed attack on police posts in August. Killing 12 people, the attack was blamed on a newly formed militant group, the Arakan Rohingya Salvation Army (Arsa). Suu Kyi may be the de facto head in Myanmar but the military is in charge of internal security. The Burmese military claims operations in Rakhine only target militants.

Suu Kyi stressed out in her speech that she felt deeply for the suffering of all people in the conflict. She added: “Human rights violations and all other acts that impair stability and harmony and undermine the rule of law will be addressed in accordance with strict norms of justice.”

The leader said the Burmese government continues to make efforts to improve the lives of Muslims in Rakhine. According to her: “All people living in the Rakhine state have access to education and healthcare services without discrimination.” However, it is worth noting that most Rohingya are denied citizenship. They don’t have access to essential government services like medical care. Because of required special permission to leave from internal camps, children and young adults could not attend school.

She also mentioned that those who sought refuge in Bangladesh may return after a verification process. Nevertheless, people believe this may be difficult because the Rohingya have not been widely recognised since the 1970s. In fact, they are called “Bengali” in Myanmar, clearly dismissing their historical relations to the country.

A Nobel Peace Prize laureate, Suu Kyi received overwhelming support from her home country but faced further international criticism. Political experts are saying that her speech was filled with truths, half-truths and falsehoods.

BBC describes the tone of her delivery as a “tone of measured defiance.” Although she said her government “condemns all human rights violations and unlawful violence,” she didn’t address allegations against the military.

What can you say about Suu Kyi’s recent speech and the ongoing crisis in Myanmar against the Rohingya? If you are required to write an essay about this topic or other political subjects, please do let us know. As a reputable academic writing service provider, we can certainly help you. Please feel free to browse through our various writing services or place an order now.

We immensely take pride for being the original and premier academic essay writing provider. We are constantly looking for new ways …
END_OF_DOCUMENT_TOKEN_TO_BE_REPLACED