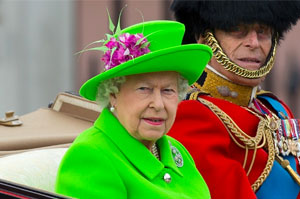 The heavens have blessed the Queen’s 90th Birthday with rain showers, but the heavy downpour did not stop spectators from capping off the three-day event. To show their love for Queen Elizabeth II, thousands of people braved the rain to join the street party right outside Buckingham Palace in England, London today.

Thousands of people attended the Trooping the Colour parade held on 11th June. It showcased the incredibly choreographed display of 1,600 soldiers and 300 horses. The guardsmen wore traditional bearskin hats and scarlet tunics, while the queen was dressed in vivid lime green coat and hat during the event.

The highlight on the third day of celebrations was seeing the queen and Prince Philip grace the street inside an open-top car. Wearing a fuchsia pink coat and hat, the monarch battled through the rain and wind to wave at the well wishers who were serenading her with a “Happy Birthday” song. Prince William and wife Kate, as well as Prince Harry were in a car behind the monarch during the parade. The queen’s son Prince Charles was not present in the merriment as he chose to attend a street party near his home in Gloucestershire instead.

After the parade, the members of the Royal Family walked down The Mall to greet guests of the much anticipated picnic lunch. The visitors, who paid for £150 to attend the luncheon, were mostly from 600 charitable institutions in the UK and the Commonwealth that the monarch supports. They were given plastic ponchos to somehow protect themselves from the rain since bringing of umbrellas has been prohibited for security reasons.

In her speech at the luncheon, the queen expressed that she hopes that the happy celebrations that took place will be a reminder of the benefits that can transpire when people gather for a common purpose.

As part of a 250-year royal tradition, the queen celebrates two birthdays. April 21, 1926 is the queen’s actual birthday. “I much appreciate the kindness of all your birthday wishes and have been delighted and moved by the many cards and messages I have received.” She clearly wants to get back to work and move on from the long celebration saying: “How I will feel if people are still singing Happy Birthday to me in December remains to be seen!” the queen jokingly ended her speech.

Her grandson William also gave out a speech. The Duke of Cambridge referred to his “granny” as a queen with “strong health and relentless energy; her sharp wit and famous sense of humour, and the fact that the Queen remains very much at the helm of our family, our nation and the Commonwealth”. He added that she is someone “that world leaders can turn to for a first-hand perspective of the arc of history”.

For those who were not in attendance in the official celebrations, about 1,000 smaller parades and picnics around Britain have taken place to pay homage to the birthday of the queen.

This year, the queen has recognised a total of 1,149 people for their contributions to their country through their respective fields. These people come from the worlds of politics, science, enterainment, sports, culture, and charity.

Specifically making a buzz is the knighthood of 71-year-old British singer Ron Stewart. The rock icon has been recognised not only for his contributions to the music scene but also for his unwavering support to charitable works. Actress Penelope Wilton, internationally known for her role in “Downtown Abbey” has also been named a dame. Britian’s first astronaut, Major Tim Peake, has become a Companion of the Order of St. Michael and St. George for space research and scientific education.

We immensely take pride for being the original and premier academic essay writing provider. We are constantly looking for new ways …
END_OF_DOCUMENT_TOKEN_TO_BE_REPLACED