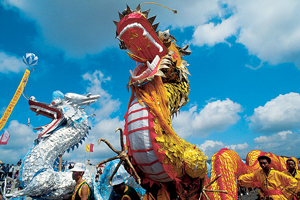 Duanwu Festival, also referred as the Dragon Boat Festival, is one of the most significant celebrations in China and Chinese communities all over the world. This event is commemorated on the 5th day of the 5th month in the lunar calendar, which falls on June 9 this year.

Held annually for over 2,000 years, Duanwu Festival pays homage to its devoted poet and minister Ou Yuan. It is also a great opportunity for Chinese people to strengthen their bodies and dissipate diseases. It is said that the first participants of this event were superstitious Chinese villagers who held races to generate rains and prosperity, as well as to deter bad luck. With Ou Yuan’s contributions to literature, Duanwu is also distinguished for its educational influence.

Ou Yuan served as a minister in The State of Chu, one of the seven warring states in 221-206 BC during the first feudal dynasty in China. He was known to be a supporter of the fight against the dominant State of Qin. He showed his love for his country through writing eternal poems namely Tian Wen (Asking Questions to the Heaven), Li Sao (The Lament) and Jiu Ge (Nine Songs). His last masterpiece was entitled Huai Sha (Embracing the Sand). After writing this final piece in 278 BC, he drowned himself in the river as he refused to witness his country fall under the Qin State.

The locals who loved Ou Yuan dearly searched for his remains in the river. They sailed and threw food like zongzi (traditional Chinese sticky rice bundles) and eggs into the water to avert fish and other creatures from destroying his body. These acts have been imitated every year to show their respect to the patriotic poet. Ou Yuan passed away on the 5th day on the 5th lunar month on the Gregorian calendar, which is the reason why people commemorate him on that particular day.

The Duanwu Festival is filled with various traditional activities. Aside from the main events of dragon boat racing and eating zongzi that come in various shapes and delicious fillings, children also wear a perfume pouch since it is believed that these fragranced pouches protect them from evil. Little kids take pride in decorating their clothes with these vibrant silk pouches and tying a five-colour thread to their neck, wrists and ankles for its healing properties. The children only remove the thread and throw it to the river after the first summer rainfall so they are protected from diseases.

People also clean their houses and hang some aromatic mugwort and calamus plants, which they also believe to ward off diseases that prevail during the summer. This is a popular custom as the leaves and stems of these plants can dispel insects and purify the air.

Celebrations in the UK

Gaining worldwide popularity, Dragon Boat racing has become an imperative sport in the United Kingdom, Vietnam, Japan, and other countries.

In the UK, the Cambridge Chinese Association organised the Dragon Boat Race at River Cam on 5th June. Boat racing teams from all over the country departed from Jesus Green early in the morning. Highly trained competitors in their colorful dragon-decorated wooden boats, paddled fast and harmoniously with the beating drums. It is said that the winning team will have good luck and a wonderful life in the following year. Just like last year, Cambridge went head to head with Oxford, eliciting loud cheers from the crowd.

Complementing the wonderful sunny weather were the festive food and drinks, highlighted by the zongzi that the visitors enjoyed. Beautiful Chinese dragons also graced the occasion and fun activities were prepared for the children. Because of the success of this year’s affair, the organisers hope to make it a part of Cambridge’s city calendar annual events.

Here at Essay Writer, we offer numerous services in appreciation to the great efforts of Chinese students as they pursue their academic success here in the UK. Please feel free to get in touch with us should you require our assistance.

We immensely take pride for being the original and premier academic essay writing provider. We are constantly looking for new ways …
END_OF_DOCUMENT_TOKEN_TO_BE_REPLACED