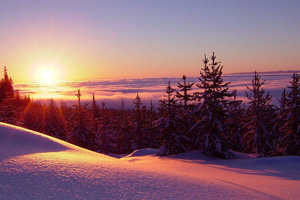 Today, 21st December marks the Winter Solstice, the shortest day of the year in the Northern Hemisphere. It is the time when the sun shines at the most southern point and the official start of winter. The sun rose at 8:04 am today and will set at 3:54 pm, providing less than 8 hours of daylight. Those in the Southern Hemisphere are currently having the Summer Solstice, which is the longest day of the year. This is because solstices are opposite on either side of the equator.

Winter Solstice around the world

The Winter Solstice is celebrated across the globe. It is considered a pagan festival but it is celebrated along with other cultural and religious traditions. In the UK, the biggest celebrations take place at Stonehenge in England. Last year, more than 5,000 people gathered at one of the most famous astronomical monuments in the world. These are composed of pagans, druids, wiccans, historians, environmentalists, astronomers, hippies, tourists, locals, students, and other on-lookers. Practitioners of Buddhist meditation and followers of eastern religions also take part in the gathering.

In China and Taiwan, this celebration is called Dongzhi Festival, which is a special time for families. They eat festive food like tangyuan (glutinous rice) that symbolises reunion and each family member gets at least one. It is believed to have originated from an end-of-harvest festival where workers get to enjoy the fruits of their labor.

In Iran, it is called Yalda or Shab-e Yalda, symbolising the last day of their Persian month of Azar. People celebrate the birthday of sun god Mithra and view this day as the victory of light over dark. Families gather and bond over pomegranates, nuts and other special food. They usually stay up all night to welcome the sunrise.

The correlation between Winter Solstice and Christmas

Christmas may be a Christian celebration but it is linked with Winter Solstice festivities. It is believed that it specifically came from the feast of Saturnalia in ancient Rome. Saturn is considered the god of abundance in agriculture. Among others, celebrations are characterised by feasting and gift-giving. When Emperor Constantine converted to Christianity, he incorporated some of these customs in Christmas celebrations.

Christmas is also referred as Yule or Yuletide, which comes from the Norse word jól, denoting the pre-Christian festival of Germanic peoples. It later on underwent Christian reformation, which is now known as Christmastide. Researchers have also linked the celebration to the god Odin, Wild Hunt, and Anglo-Saxon Mōdraniht.

Did you learn something new from this blog post? Feel free to browse through our informative blog posts and essay samples. Should you require our assistance in any of your academic writing projects, please do let us know straight away. We have numerous writers who are expert in different fields. Please fill out the order form with your exact requirements to get started.

Today, 21st December marks the Winter Solstice, the shortest day of the year in the Northern Hemisphere. It is the.

The autumn sky in London will be colourful and bright on Saturday, 5th November for the Bonfire Night 2016. Extravagant.

We immensely take pride for being the original and premier academic essay writing provider. We are constantly looking for new ways …
END_OF_DOCUMENT_TOKEN_TO_BE_REPLACED